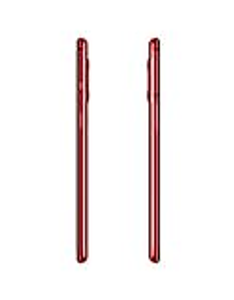 OnePlus has recently unveiled two new phones and it’s the standard OnePlus 7 that’s not getting as much attention as it’s more expensive brother. However, it’s not just a cheaper version between the two and is a premium phone from OnePlus that can still give phones like the Samsung Galaxy S10 and Google Pixel 3 a run for its money. To learn more about this phone and the OnePlus 7 India price, continue reading.

There is almost no change in the front side of the OnePlus 7 compared to the OnePlus 6T which leaves us with a 6.41-inch screen showing 2340 x 1080 pixels resolution, 19.5:9 aspect ratio and 402ppi of pixel density. The waterdrop notch is also there and the screen-to-body ratio is 85.5%. Just like the previous

phone, there is no microSD card slot or 3.5mm headphone jack which is always something to consider when getting a new phone. OnePlus also didn’t go for an official water resistance certification or IP rating but just indicated that it is water resistant. Some users were not satisfied with the fingerprint sensor under display of the OnePlus 6T as it took some time to get used to. This year, OnePlus improved its under display fingerprint sensor and it works quite fast. After the OnePlus 7 release date India, the phone can be found in Red and Mirror Gray color.

The rear camera got a big boost and is now a 48-megapixel one with f/1.7 aperture instead of the old 16-megapixel one. However, there is no telephoto or ultrawide angle lens accompanying this camera which is slightly disappointing. This 48-megapixel camera will be accompanied by a 5-megapixel depth sensor camera with f/2.4 aperture. The primary camera is using a Sony IMX586 sensor this time so there are noticeable changes in the picture quality. However, it’s still not on par if you compare it with the Samsung Galaxy S10E or Apple iPhone XR. Considering the OnePlus 7 India price, you won’t be too disappointed. As for the front camera, it’s a 16-megapixel 25mm wide sensor with f/2.0 aperture. There is also the

Google Pixel 3a you can check out if you don’t want to wait for the OnePlus 7 release date India.

Although the standard OnePlus 7 doesn’t offer the same display or camera setup like the OnePlus 7 Pro, things under the hood are quite similar. Users will get to enjoy the same smooth Android 9.0 Pie experience thanks to the latest Qualcomm SDM855 Snapdragon 855 7nm octa-core processor paired with an optional 6 or 8GB of RAM depending on the version you choose. It’s also two of the first phones to have the Universal Flash Storage (UFS 3.0) technology which means both the reading and writing speed will be faster which should increase the speed of most of the apps. However, users won’t get the Warp Charge fast charging technology or 30W fast charging and will get the regular 20W fast battery charging feature instead. Some of the other notable features are: 128/256GB built-in storage, stereo speakers, Bluetooth 5.0, 3700mAh battery, USB 3.1, Type-C 1.0 port and NFC.

The OnePlus 7 will be available for about ₹ 35500 . We don’t have any official OnePlus 7 release date India yet but it’s expected to be here sometimes in May, 2019.

Things we loved about the OnePlus 7: